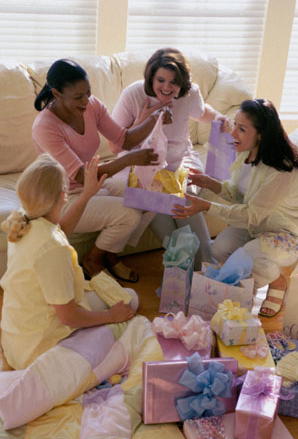 Customs in the world

All over the world, rituals related to the worship of the altered status of women are as old as the world tradition. It was normal and natural for other women to get involved in the preparation of the mother's birth. Childbirth and pregnancy belonged to public affairs, in which the women's part of the community participated. The women did not need any special invitations and pretexts to participate in these preparations. Today it is not so natural anymore. Pregnancy and childbirth are private and too intimate matters, that someone else apart from the woman giving birth and the father of the child could participate in them. Fortunately, the practice of worshiping the altered state in the form of a tummy tuck is different. Here, a large group of friends and family are welcome. After all, they are organized out of the need for closeness and sharing one's happiness with loved ones.

The roots of this custom are there. In the United States, the tradition of "belly" parties has appeared over the top 100 years ago. During afternoon meetings with tea and outdoors, women closely related to the pregnant woman dated, to celebrate the upcoming birth of a baby. Currently, Baby Shower is organized on a much greater scale. These are no longer just afternoon teas, but big parties, from the buffet, drinks and, of course, lots of gifts. They are organized not only for the first child, but also for the second and subsequent ones. Some people have the habit of organizing baby showers several times during the same pregnancy: for family, friends, co-workers. Baby Shower for future dads are also becoming more and more popular.

Tummy parties are also organized in Mexico, Brazil, or in the Dominican Republic. They have different names, but one goal - to make the future mother happy. Parties cannot do without games, which are a very important element of every meeting. In the Dominican Republic, these are mainly co-educational parties and have the character of all-night dance parties. In Argentina and other Catholic countries, baptisms are more important than Baby Shower, which is handled with great panache. This is the first party, during which guests can visit young parents and their baby.

The custom of organizing belly parties is becoming more and more popular in Europe (France, Spain, Anglia, Ireland). They are usually organized in the last trimester of pregnancy. Depending on the country, these are either women's-only parties (e.g.. in Spain), or co-educational (e.g.. in England, or Ireland). They are similar in nature to those organized in North America. Their main goal is to spend time pleasantly with their loved ones and to rejoice together with the baby that is about to be born.

On the Asian continent, Baby Shower parties have a slightly different character, than in America, or Europe. They are held in the seventh month of pregnancy (the number "7" is lucky). They have different names and ceremonies depending on the region. In India, during the party, prayers are held for the welfare of the future mother and baby. The party is often called a bracelet ceremony, because during the meeting the women prepare the bracelets and put them on the pregnant hand. They are symbols of her blessed state. Sometimes the expectant mother has so many of them, that they reach the elbow. He takes them off only during the solution, which is supposed to have a relaxing effect and distract her from the nuisance of labor. In Afghanistan, it is celebrated on the sixth day after birth. The white cloth cutting ceremony is popular among the Jewish community, from which the clothes for the newborn baby will be sewn.

There are several different rituals for pregnant women in Africa. They are mainly aimed at warding off evil spirits and ensuring a safe birth for the woman. Prayers and spells are an integral part of every ceremony.

Australia and New Zealand are countries, which have long popularized the Baby Shower custom. It has the character of a party with friends, where similar to the United States, gifts for the expectant mother play a vital role. Meetings are held at home or in a restaurant, they are accompanied by joint games and activities. If this is the will of the guests and my future mother is fine, meetings can extend even late into the night.