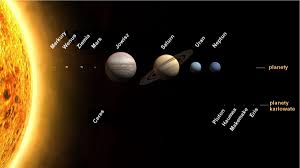 The stars were the work of the gods. According to the belief of the Greeks, were created by Zeus. Initially, they were the offspring of one of the Titans, Astrajosa, and rebelled against Zeus, succumbed to its thunderbolts and, shattered, they scattered across the firmament with luminous dust… In the beliefs of the Sumerians and Akkad (the people also inhabiting the Euphrates and Tigris basins) and the Babylonians - they were demigods. The planets - as shinier and more mobile - were considered to be the revelation of the gods themselves. They also gave them names.

Marduk - the most important deity of the Babylonian pantheon - was given the largest planet, gliding seriously and slowly among the constellations, a strong glow overwhelming others, namely the planet Jupiter.

Ninurta - the ruler of the underworld - was given the planet Saturn, glistening with a dim glow, clearly different from the light of the stars.

Nergal - the god of war - was given a glowing red glow to the planet Mars.

Ishtar - the goddess of love - was given the planet Venus, shining bright and glittering in the red of sunrise and sunset.

Nabu - the messenger of the gods, the equivalent of the Greek Hermes - he received a small one, faintly glowing and the fastest-moving planet Mercury.

There were seven planets. The sun already had a god - Shama-sha (with the Greeks it was the god who governed the course of days and years, source of light and life - Helios, brat Selene i Eos), The moon is the god Sin (in the Greeks - Diana, be Selena, with the Romans - Luna). Other planets of the solar system - Uranus, Neptune and Pluto - were impossible to see with the naked eye, were only discovered in our time.

The Babylonian names of the planets were completely forgotten over time. They were replaced by Greek ones, and then Roman and they also remained in the official nomenclature to this day. However, none of the deities were offended. Greek names were Babylonian equivalents, Roman, in turn - Greek (Roman mythology, moreover, took over the Greek with all the "benefits" of the inventory).