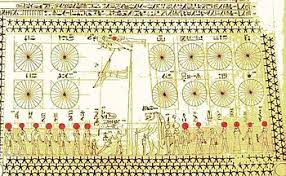 The Egyptian calendar is one of the oldest in the world. It was probably founded in 4241 r. p.n.e. In any case, at that time the lunar calendar was already known.

Initially, it was divided into 3 seasons (echet, projet and szonu) i 12 months, counting after 30 days. So it consisted of 360 days.

The calendar was more trouble than good. Fortunately, disagreements among the gods caused, that such a planned calendar has come to pass 5 days and the calendar approached the solar count. This is how it happened:

“The Goddess of Heaven Nut fell in love with the God of Earth - Geba and married him secretly. Upon learning about this, the sun god - Ra - became very angry. Nut was his granddaughter, but he loved her very tenderly… He cursed Nut: »If she ever wants to give birth to a child - let there be no such month of the year, in which it could come into the world!«Tearful Nut, who was expecting a baby, she ran to the god of wisdom - Tota, to help her. Tot went to the moon god Khonsu and offered, to play dice with him. Tot won from Khonsu 5 days, which he had hidden for a rainy day. And so the god Tot added to the year 5 days, during which the goddess Nut gave birth to all her children. On the first day, Osiris, the god of the underworld, was born, patron of the dead, the second - Horus the Elder, god of heaven, who later became the first pharaoh of Egypt, the third - Set, God of War, the fourth - Isis, goddess of the earth, the fifth, finally, Neptyda, goddess of love ".

Of course, it was a reform, which the priests justified with "divine reasons". Thanks to her, the Egyptian calendar was already counting 365 days and came very close to the solar count of time.

Extra 5 the days of this calendar, however, had no name and were considered unlucky. These were penance days, where priests ordered prayers, to protect against misfortunes.

Initially, the months had no names as well. They were numbered within the periods. Pisano: first (month) echet (okresu echet), second shonu, third projet etc.. (periods had after 4 months). The months were broken down into decades (a month had them 3, period - 12, year - 36). Over time, the months got their names. They were called (starting with the first month of the first period):

And this calendar - though improved by the god Thoth - was not perfect. 365-after all, the Egyptian calendar year was shorter by 0,2422 day of the astronomical tropical year. The beginning of the year - always celebrated on the day of the beginning of the flooding of the Nile - it drew back more and more: co 4 patch The 1 day, within 40 years - o 10, within 400 —The 100 etc.. In this situation, it finally came to this, that even the seasons did not occur at the right time. But the priests realized quite quickly what it was.

They also calculated, that the calendar counting of time will be re-aligned with the astronomical one after 1460 years, responding 1461 the years set by the star Sopdet (this time was called the "Sopdet period", or - in Greek - "Sotis period").

They also found a way to deal with this constant "wandering" of the calendar beginning of the year: what was enough 4 years enter a leap year, increasing the length of the calendar year by 1 day. However, they did not make any changes to the calendar. After all, the work of the gods was sacred, and none of the mortals could change it.

Only after the death of Alexander the Great, when the influence of priests in the country was limited, the conditions for reform have arisen. He took it in 238 r. p.n.e. Ptolemeusz III Eurgetes. By the Kanapos decree, he recommended what 4 years to add to 360 days no 5 (as it has been done from time, when the god Tot won them from Khonsu), but 6 days. From then on also the sopdet years (corresponding more or less to the tropics) began to coincide with the calendar years.

Egyptian people - used from millennia to , "Holy calendar" - he was not, however, delighted with the reform. A paradoxical situation arose: officially the calendar of Ptolemy III was in force, but the calendar of the god Thoth was widely used. Chaos, which therefore prevailed, easy to imagine. It was only mastered by Emperor Augustus by decree of 30 r. p.n.e., by introducing the Julian calendar, called in Egypt "Alexandrian" or "Macedonian". In fact, it did not differ from the Ptolemy III calendar, the innovation, however, was a leap year (occurring co 4 patch), and also the beginning of the year, appearing in two terms: on the first day of the month of Thoth, so - on the day of the heliacal sunrise of the star Sopdet, that is Sirius, roughly coinciding with the mouth of the Nile (19—21 VII), i 1 January, so according to the "Roman calendar" in force throughout the empire. The first, "holy", was celebrated very solemnly.

A starting date for the Egyptian count of time? The Egyptians did not use the era. The following years were counted according to the reign of the pharaohs, and they began this calculation from the time of the accession to the throne of each new ruler. Fortunately, historians managed to establish the order of the rulers and the time of their reign. Correlation of the Egyptian chronology with ours does not pose any serious difficulties.