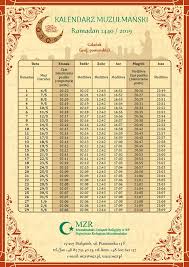 The Mohammedan calendar was introduced by Muhammad in 632 r. He rejected the count of time used by the Arabs so far, based on the lunisolar system, with leap months and era, calculated from the so-called. "Year of the elephant" (i.e.. the year of the invasion of Arabia by Yemen's troops using war elephants). He based his calendar solely on the lunar system.

At the beginning, the Muslim year consisted of 12 months. They did not have a strictly defined length. Each month began with the appearance of the first crescent of the moon after the new moon and continued until the next appearance after the next new moon.; then a new month began. So it lasted a month 29 or 30 days. And after 12 lunar months - next year began.

Even so, the year of the Muslim calendar is almost 11 days shorter than the tropical year. So its beginning falls on a different day each time. However, it always begins according to the phase of the moon that begins the month. The months are divided into weeks.

The beginning of the era is counted by Muslims from 16 VII 622 r., i.e.. Hijri dates, that is, the flight of Muhammad from Mecca to Medina. W 11 In the year of Hijra, Muhammad's followers adopted the calendar he established. It is still in force today in many Arab countries - not only as a religious calendar, but also state-of-the-art.