And yet it is spinning! 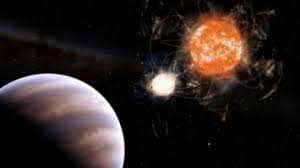 In ancient times, ideas about the world were not always correct. Babylonians, e.g.. they considered, that Earth is land, which rises to the central mountain of Ararat, surrounded by the ocean. Above it stretches the dome of the sky in the shape of a bell, bathed in sunlight during the day, and dotted with stars at night. For the Egyptians, the narrow valley of the Nile was the world, covered with an equally narrow sky. The flat vault of heaven was supported, beyond the mountainous edges of the highlands, on four forked poles. At night, stars hung like lamps from the flat sky, and during the daytime the sun wandered on it. For the Chinese, in turn (in the third millennium BCE) The earth was round and flat, surrounded by mountains and a double ring of an endless ocean. Anaximander of Miletus (611—547 p.n.e.) argued, that the Earth is an upright cylinder immersed in great water. People live in the upper circle of it. Delphi was the center of this circle.

The concept of a spherical Earth did not appear until around 535 r. p.n.e. They were formulated by Pythagoras of Samos (572 —497 r. p.n.e.). He considered, that the Earth is the center of the Universe and, together with the Sun and Moon and the stars ... it rotates around the "central fire". A little later - in the 4th century. p.n.e. - Heraclides of Pontus announced the thesis about the rotation of the Earth on its axis. He argued, that Mercury and Venus orbit the sun, but… The sun and all the other planets around the Earth. Evidence for a spherical Earth, The moon and other planets were presented by Aristotle in his work "On Heaven" (384—322 p.n.e.). Aristarchus of Samos, on the other hand, approx 265 r. p.n.e. - calculated the distance of the Moon and the Sun from the Earth and put forward a bold thought (risking the opinion of the wicked and blasphemers), that

no the sun revolves around the earth, but vice versa. Eratostenes z Cyreny (276—195 p.n.e.) and calculated the length of the earth's meridian, merely mistaken 0 about 200 km! The length of the meridian he gave was 252 000 stages, i.e. approx 39 800 km. Ultimately - the knowledge about the universe was summed up by Claudius Ptolemy (100—168 n.e.), by announcing your geocentric theory.

The amazing thing: not knowing the truth, which was only discovered by Nicolaus Copernicus (1473—1543), ancient astronomers were able to accurately calculate the apparent movement of the sun around the earth and the moon's orbit, as well as the motion of the planets and star constellations, which became the basis of time count and the first calendars. The Babylonians calculated, for example. Mercury's movements with greater accuracy than its later - Hipparchus and Ptolemy. The circle of the Moon around the Earth, determined by them, only shows 0,4 sec. difference from the calculations of our astronomers, equipped with the most perfect technical means!

The astronomical knowledge of the ancients was impressive. This is evidenced by the following achievements:
• W VII — VI w. p.n.e. The Babylonians discovered the periodicity of the solar and lunar eclipses, at the same time obtaining the possibility of predicting them.

• W III w. p.n.e. Aristillos of Samos and Timocharis of Alexandria began to systematically observe the positions of the stars.

• W II w. p.n.e. Greek astronomer, Hipparch, made the discovery of precession, simultaneously announcing the table of the movement of the Sun and the Moon.

• Whereas Ptolemy (I/II w.n.e.) had lists of solar and lunar eclipses since 747 r. p.n.e., and therefore almost from the entire millennium!

These facts prove, that astronomical observations were not only made for a long time, but also systematically. Therefore, it was not difficult to calculate the average apparent motions of the Sun., Moon and planets, and thus the actual length of the year. In this situation, create a calendar, consistent with these astronomical calculations, it might actually seem like a trifle. The case, however, turned out to be more complicated.