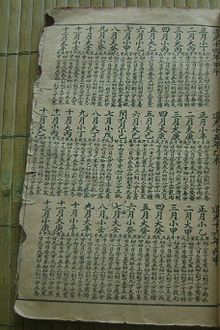 The Chinese also created a calendar very early on. We know, that already in the third millennium BC. they conducted astronomical observations. Some guess, that even 17-18 thousand years earlier. Certainly - an exaggeration. But it is known, that still to 1280 r. neither. The Chinese used a calendar, in which the years were counted from a certain date distant by… 143 000 years!

There is no reason to doubt, that Chinese culture is one of the oldest, and maybe even the oldest. However, the sources, on the basis of which the alleged age of Chinese astronomy was established, they are so vague and contradictory, that it is difficult to rely on them.

Emperor Cheng was largely at fault here (III w. p.n.e.), who, having defeated other princes of the then broken empire, became infamous for this, that he had all the libraries burned. Szy-Huang-Ti, that is, the First Yellow Emperor (this was the title he took), he wanted, that the nation would forget about the past, and the history of China began with his reign. The ruler's order was obeyed with absolute obedience. Admittedly, after his death, historians and writers began to recreate the burned works, but… who would be able to remember them all? So much was confused. Original, the Chinese calendar known to us was based on the lunar count. It was probably founded in 2637 r. p.n.e. (this very year was taken to mark the beginning of the new calendar age). It consisted of 12 months 29- and 30 days. So the Chinese year counted 354 days.

To compensate for the discrepancy with the tropical year - it was added 7 times in a 19-year cycle the thirteenth month.

Over time, the Chinese calculated, that is the year 365,5 day. It was then that the reform was carried out. The new calendar was lunar-solar in nature and consisted of 12 months 30- and 31 days (alternately). So it was the Chinese year 366 days.

The beginning of the year was between 21 I a 19 II (according to our timing). The months had no names. They were marked with numbers. They were divided into decades. Setting the beginning of the year, which in China was celebrated very solemnly for several days, specialists were taking care of. Their findings were approved by the Son of Heaven, emperor. For many centuries, the calendar was developed by a special astronomy office, whose director, holding the office of minister, every year he submitted a new calendar to the emperor for approval. After approval - copies of the calendar were handed over to the highest dignitaries of the Empire according to a meticulously established list. For receiving a calendar was an expression of a special grace.

Some dynasties took a different month for the beginning of the year, sometimes it was also done by rebellious provinces, wanting in this way to mark his independence. In general, however, the new year came in January or February.

W 163 r. p.n.e. 366-the day calendar has been reformed. This work was done by Sy-ma T'sien, bearing the honorable title of Grand Duke Astrologer. He adapted the current calendar to the solar year, thanks to which the Chinese timing did not differ much from the solar one. Emperor Wen also ordered, was that year (163 p.n.e.) was considered the beginning of a new era. W I w. neither. a calendar using a 60-year cycle was also introduced. It was proclaimed by the Son of Heaven of the Hia Dynasty in Ming-t'ang, that is, the Calendar House, w 105 r. The era was assumed to be 2637 p.n.e. To denote individual years, sets of cyclic characters were used, belonging to two groups: the so-called. t’ien-kan, that is, "heavenly sexes" and ti-chas, or "earthly branches". The first of these groups consisted of 10 characters, the second - with 12. The next first t'ien-kan character was juxtaposed with the first t'ien-kan character, the first t'ien-kan with the eleventh character of t'ien-can, etc.. After repeating the group of t and s signs five times, a 60-year time cycle was obtained.