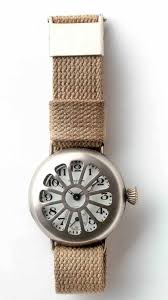 Clocks and watches have taken over the world. They were made in many European countries, in Japan and China.

Poland was also famous for its clocks. Our masters made them already in the first years of the 15th century. Leonard Wunderlich from Krakow was especially famous. W 1464 r. he even made clocks with a "wake up call".

W XVI w. there were many horologists in Krakow, Gdansk, in Warsaw, Toruń, Wroclaw, Lublin, Shore, and even in Dukla. Beautiful table clocks were made, carriage, wall, stackable, small pectoral letters, i.e. women's watches, worn on the chest, as well as "silent" and ordinary alarm clocks. Krakow was especially famous for the production of clocks and watches. W XVI w. even a watchmaker's guild was created here. The clocks in Gdańsk also enjoyed well-deserved fame, and not only in the country.

The oldest table clock made in Poland is the canned clock of Echard Stall kept in the National Museum in Poznań. (d. w 1584 r.) from Poznan.

W XVI—XVII w. We also made turret and tile clocks (the so-called. "Frogs"). Some of them have survived to this day and can be found in many of our museums. It wasn't just the hours that showed, but also (had 9 tips) days, months, signs of the zodiac, sunrise and sunset, and the phases of the moon. Full hours and quarters of an hour were chiming. W XVI w. The production of worn watches has also begun in Poland, first of all pektorialików, and starting from 1600 r. - "Nuremberg eggs", and from 2 mid-seventeenth century - pendulum clocks. We have had many masters and many famous workshops, whose watch works enjoyed great fame. W XVIII w. especially the watches and clocks of the royal court clockmaker were known, Franciszek Gugenmus from Warsaw, in Kraków - Jan Gotfryd Krosz. Their products are the greatest decoration of museum collections to this day. King Zygmunt III Waza was also a watchmaker. His son, Jan Kazimierz, inherited a large collection from him. Unfortunately, it has dissipated.

W XVII—XVIII w. coach clocks were in vogue, wall (discs), fireplace, pocket and chimes. W XVIII w. they were also born (in the Black Forest) cuckoo clocks. They were made of wood.

The watches were still expensive, but - as Jędrzej Kitowicz wrote - “at the end of the reign of Augustus III they thickened like this., that they could be seen at the footmen, coachmen and other court and city teams ". They were first worn on tapes or ribbons, later on silver or gold chains. They were fashionable, though expensive, also women's watches with music. Great gentlemen wore "small" watches, but magnificent ", knocked out with precious stones, ornamentowane (e.g.. Stanisław August had a button-sized watch - the work of Gugenmus, son of Francis). The real "miracle" was a clock constructed by a famous French clockmaker, Leroya (was in Lisbon). It had two shields, days on which you could read, months, ordinary and leap years, seasons and hours in… 125 cities of the world simultaneously!

The industrial production of watches began at the end of the 18th century., but the first factories began to appear only in 1 mid-nineteenth century, mainly in Switzerland, which became a true "watch power". Poles also contributed to the development of this industry: Antoni Patek and Franciszek Czapek from Warsaw. After the fall of the November Uprising, they settled in Geneva, where they set up a joint workshop. W 1845 r. their paths diverged - they ran separate enterprises. Patek formed a partnership with the French inventor of the renovator (allowing the spring to be tightened with a knob), Adrian Philip. The company still exists today. There are only a few pieces of Patek and Czapka watches from the years 1845-1848 in Poland (two of them are in the Historical Museum of. Of Warsaw).

• The first Polish watchmaking factory was established in 1835 r. in Warsaw. It was founded by Franciszek Schubert. It produced tower clocks and several home and pocket varieties.

• Soon after, the factories of Ludwik Maurycy Lilpop and Edward Jarocki and Spółka were opened in Warsaw.

• At the turn of the 19th and 20th centuries. the Leopold Bobczyński Plant operated in Warsaw. He specialized in the production of tower clocks.

• Michał Mięsowicz's factory in Krosno was the largest, founded in 1901 r. It was called the "First National Clock Factory".

• W 1920 r. a factory of home clocks was established (wall panels, floorstanders and alarm clocks) "Swit" in Cieszyn. It worked until 1936 r.

And after World War II ?

• The Pieszycka Clock Factory was also established (in the 1950s, it produced office clocks; nowadays clocks of this type, as well as popular alarm clocks are produced by Zakłady "Predom-Me-tron" in Toruń).

• W 1959 r. the Mechanical and Precision Plant "Błonie" was established in Błonie near. Of Warsaw; do 1969 r. produced youth and men's wristwatches.

• Wrist watches (electronic) were produced by the "Mera" plant in Warsaw (specializing in the manufacture of quartz watches) and Łódź Mera-Poltik Plants (manufacturing alarm clocks and quartz watches).

Speaking of wristwatches - a curiosity: such watches appeared only in 1905 r. Jan Wilsdorf came up with the idea of ​​producing them, head of the company "Rolex" in Geneva. The invention caught on quickly, almost completely eliminating case watches.