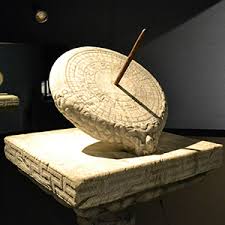 Since people divided the day into hours (the division of the day into day and night was of course the work of the gods), they had to count and mark those hours. So timers became necessary.

The oldest way of measuring time and determining the time of day was to use the shadow of motionless objects illuminated by the sun's rays. Way, by the shadow of a stationary object on the Earth's surface during the day, it is the equivalent of the road, which the sun draws on the sky during the day. The length of the shadow varies according to the height of the sun above the horizon. The longest is when the sun is just off the horizon, so at sunrise and sunset; the shortest - at noon (then it points to the north). The time of day can therefore be determined from the length and orientation of the shadow.

This phenomenon became the basis of the first timepieces - gnomes.

3000-2000 years BC appeared. in Egypt, Babylonia, India and China. They didn't measure the time very accurately, but probably enough for the needs of the time. In Egypt, obelisks played the role of a gnomon. A significant number of them - perfectly preserved - have survived to our times. The oldest one is the obelisk in the temple of Abuisiir, erected approx 2700 r. p.n.e. Many of them were taken abroad after the fall of Egypt. And so e.g.. on Piazza del Popolo in Rome there is an obelisk from the 12th century. p.n.e., removed by order of Emperor Augustus. There are similar ones:. in. in Paris, London and New York.

In the 2nd millennium BC. The Egyptians invented portable sundials. They already made it possible to precisely define 6 hours before and 6 hours in the afternoon. But - only theoretically, because they were constructed incorrectly. Gnomes were also known in China. According to Chinese descriptions, they were already built around 2500 r. p.n.e. In any case, they were certainly used during the reign of Emperor T'ang-Ti-Yao. They appeared in Babylonia and India in the second millennium BC. They were known and built also in Europe. Proof of this is the Stonehenge Stone Circle in England. He served, as stated, not only to determine the spring / summer solstice, but also to count the days of the year and the time of day.

Over time, sundials have been improved. Probably the Babylonians did. Having stated, that it is too difficult to map the movement of the Sun through the shadow of a gnomon on a flat surface, changed the shape of the clock face. The rod of the gnomon was not on the plane, but at the bottom of a vessel in the shape of a cup cut in half. A scale was drawn on its inner surface, resembling the meridian lines on a globe. As a result, the shadow marked equal sections of the road at regular intervals. Following the example of the Babylonians - also the Greeks, and then the Romans, they began to build improved sundials. From Pliniusz (23—79) you know, that already in 293 r. p.n.e. Consul Papirius Cursor erected a sundial in Rome next to the Temple of Quirinus. More of them were created over time. On the other hand, small ones were produced for domestic use, portable, as well as worn clocks. The oldest such clock (from preserved until today) is called. "Portici ham" - a clock made at the turn of the 1st century. p.n.e. i I w. neither. of bronze, w ‘kształcie szynki (hence its name), found in the ruins of this city, destroyed by the eruption of Vesuvius.