In captivity of the stars and planets 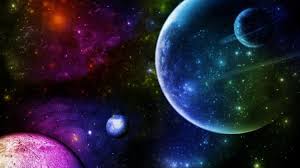 Heavenly deities - and therefore the stars and planets - not only determined the life and fate of the world, but also people and nations. Already in ancient Babylon, they were associated with people and their activities. From this belief and many other superstitions one of the first sciences was born - astrology, that is, the science of making predictions based on the position of the stars and planets in the sky.

The planets and stars also determined character, influencing people from birth to death. Every month - a different constellation, different zodiac sign. Every year - a different planet. Isztar (Venus) she wielded love, Nergal (Mars) - war, Marduk (Jupiter) - politics. The celestial bodies were ascribed feelings of friendship or hostility (e.g.. Saturn - the father of Jupiter was the lord of time and death, it was symbolized by the hourglass and the scythe cutting through human life). Initially, the gods intervened directly on Earth. Later - they only sent rays, vibration, influencing earthly life. Another theory was, that there is a sympathetic relationship between heaven and earth, a kind of magic coupling. So people were like wheels in the great space machinery. Astrology spread throughout the world at that time, especially after the Persian conquest of Babylonia in 538 r. p.n.e. She came to India, a nawet Chin. It also became very popular in Egypt and Greece. It was divided into fortune-telling, horoscopic and general kind, that is "predicting" (foretelling the future of the king and the country on the basis of either celestial phenomena, be meteorological).

A special astrological calendar has even been developed in Egypt, in which each day was strictly defined by divination. Namely - days think very much

born, completely unhappy, very inauspicious, more auspicious than unhappy, and more unfortunate than happy. And so e.g.. day 13 in the second month of the stroke (according to our calendar - 26 X) considered "very successful" ("Whatever you see on that day, will be good for you "), day

23 in the second month of the stroke (7 XI) marked as "more inauspicious than happy" ("Whoever will be born on this day, will be eaten by a crocodile "), day 15 in the fourth month of the stroke (24 XII) considered "completely unsuccessful" (“Don't go out through any door tonight, it is the day, in which the goddess of darkness Kawket appeared ").

However, these were predictions for the poor. Other omens were used for the wealthy. The sky was observed when this important man was born and a horoscope for life was compiled from the position of the planets, conclusions were also drawn for individual days.

Examples of astrological divinations date back to the beginning of the 2nd millennium BCE., and according to some - even in the time of Sargon I. (2369-2314 p.n.e.). Later, these fortune-telling was grouped into collections, the most important of which, zwany „Enuma Anu Enlil”, it was given its final shape at the end of the 2nd or the beginning of the 1st millennium BC.

Of course, astrology today has an unequivocal assessment, as well as other "fortune-telling". In the old days, however, it had a positive meaning. She was the driving force behind astronomical observations. By serving beliefs, it fulfilled practical tasks. It contributed to getting to know the world of that time. It preceded astronomy, it was thanks to her that the observations of celestial bodies developed, astronomy has reached such a high level.