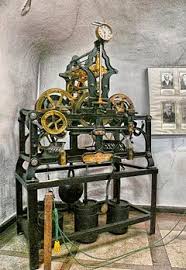 This era began with Gerbert of Aurillac (935—1003), later Pope Sylvester II. W 997 r. He reportedly came up with the idea of ​​constructing a clock based on a system of wheels and wheels, thus making a breakthrough in horology. But this is only a hypothesis, in addition, it is based on questionable accounts.

The first mechanical clocks were huge machines, moved by heavy weights. We call them mechanical, because the "drive" that made them move was the weight, thus mechanical force. They indicated "equal hours" - same day and night. So they included 24–hourly division of the day. This fact was also expressed in the shield and its division created later. Three systems of this division were created: "Italian" - with 24 numbers (od I do XXIV), "Twelve-hour" - with numbers from 1 do 12 and "Nuremberg" - with 16 numbers. The first - was widespread in Italy, the second - in France, Spain, The Netherlands and West Germany, the third - in Nuremberg and some German countries. The third referred to the so-called. day and night hours, he was also the most troublesome (night hours began after an hour 16, and after 8 night time - daylight hours, counted from 1 do 16).

When did the day begin?

According to the "Italian" system - at dusk. So the day was counted from dusk to dusk, i.e.. from I to XXIV. This method of counting the day became popular especially after 1326 r. This year, Pope John XXII ordered the bells on Ave Maria to ring half an hour after sunset. According to the "twelve-hour" system - a day was divided into 2 equal parts, counting after 12 hours. The points of division were moments: noon and midnight. Determining noon was not difficult (they were shown by sundials). So the hours were counted from noon and from midnight - from 1 do 12 (as it is now).

In Nuremberg, however, the time was counted from sunrise to sunset, so - from 1 do 16 and from 1 do 8. So there were clocks that ran day and night, but in every country, and even the city, they showed different times at the same time.

The ordering of this matter, however, was beyond the capabilities of the people of that time.

The first mechanical clocks were installed primarily in monasteries. Soon they also wandered to the church and town hall towers. They were called - regardless of their type - "horologies". In Poland - initially - with "hours", but that term did not catch on. They were replaced by a "clock" (from the German "Zeiger").

• The oldest tower clock was the Big Ben's predecessor on the tower of Westminster Cathedral in London, built in 1300 r. commissioned by Edward I.. His name was Big Tom. Unfortunately, all traces of him were lost.

• Of the existing clocks, the oldest is located on the tower of Wells Cathedral in England, built approx. 1325 r. However, it was rebuilt several times.

• Dover Castle tower clock, in southern England, zbudowany został — jak głosi tradycja w 1348 r. However, studies have shown, that later. Nevertheless - it is one of the oldest, the mechanism of which has not changed since the 14th century.

• The first mechanical clock in Poland was installed in the town hall in Wrocław in 1368 r. He survived until 1888 r. Only the bell ringing the hours remains from the old clock to this day. The impressive dial - the work of master Krzysztof Carlla - comes from 1580 r.