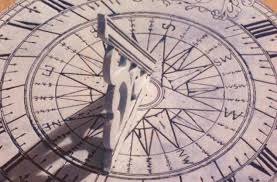 The Julian calendar has sorted out many matters related to the count of time, but not all. Counting the passing years since the foundation of Rome has not become widespread. Rather, it was a "consular era", i.e.. counting the years according to the incumbent consuls or emperors. In this situation, the correlation of various chronologies was very difficult, if possible at all. Contemporaries and posterity got lost. Actually, no one was sure, at what time does he live.

A modest Roman monk decided to save everyone from this trouble, Dionysius the Little (d. ok. 540 r.). Having enumerated, that Jesus Christ was born 25 XII 754 r. since the founding of Rome, he turned to the pope with a proposal, to start a new era from the birth of Christ - the Christian era (today we just call it "our era"). Unfortunately, a good idea, though kindly received by the Pope, it did not gain universal approval. Years were still counted by the consular era in many countries. Pisano: years after his (one year after the consulate). The Byzantine emperor Justin II also officially returned to this era (565 —578) assuming the title of consul. The documents stated at that time, next to the years of the reign of the emperor, also the years of his consulate. This custom survived in Byzantium until the 9th century. The consular era was also used in the documents of the papal chancellery.

The years of reign were introduced by Emperor Justinian I the Great in 537 r., ordering, that in all documents - apart from marking the day and month - the year of reign and the year of the consulate should be given. This method of "numbering" the years has also found application in the West, especially in this part of Italy, who was under the authority of Justinian.

In Poland, we meet with different dates: according to the bishop's pontificate (year pontificate) and according to the reign of the rulers (years reigns). The last method of dating was already at the end of the 15th century. rule. But it was used alongside dating "from the birth of Christ" (A.D).

In medieval Europe, here and there, however, other eras were also used: the era of the greek olympics and the ab urbe condita era, that is, from the foundation of Rome. The use of the Diocletian era was also fairly widespread (years under Diocletian). It started 29 VIII 284 r. and was used in Egypt for several centuries, where it most likely arose (to this day it is used by the Egyptian Copts).

The Byzantine era was also used in Byzantium, according to which the years were counted "from the creation of the world" (years from the world). According to her, the years were counted from 5508, more precisely - from 1 IX 5509 r. p.n.e. (the year began in Byzantium 1 IX). It was quite widespread in countries related to the Byzantine Empire, m. in. through common (Orthodox) religions. Na Ruisi np. it was used until 1700 r.

It is worth mentioning the Jewish era as well. Initially, the Jews used the Seleucid era, ahead of our Fr. 312 years. Do XI w. it was often used in Jewish chronology. Od XI w. the advantage, however, was gained by a new one - years old "from the creation of the world", which, according to Jewish rabbis, was to take place in… 3760 r. p.n.e.

In Mohammedan countries, the Muslim era was used, years from the so-called. Hidżry, i.e.. Muhammad's flight from Mecca to Medina in 622 r.

Our era (from the birth of Christ) spread in Europe at the end of the Middle Ages. W XV w. has already become commonplace. But it was almost necessary 1000 years from its proposal by Dionysius the Little, that she may finally prevail. By the way, Dionysius made a mistake in his calculus for Fr. 2 patch (and according to some - even Fr. 4 or 9 years). However, this is not certain, nor essential.

The beginning of our era has, after all, an arbitrary character. Its introduction, however, has had an important meaning. Based on it, it was possible to:. in. establish a unified chronology of world history!

And this is the correlation of different eras with ours:

Of course, these are the eras used in Europe or in the countries of our civilization circle. Another "starting year" - as already mentioned, when discussing individual calendars - they have, for example,. Hindus. The Sak era is still used here today, years from 78 r., being 1 the year of the Hindu era. Yet another - the Japanese, who count years from 660 r. p.n.e. (our 1977 r. was so 2637 r. Japanese Era).