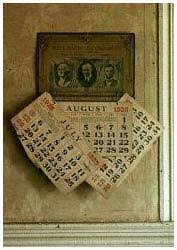 The first attack on the Gregorian calendar was carried out by the French Revolution. On the initiative of a mathematician, G. Romme’a, The Convention set up a special commission to draw up the new calendar, breaking completely with the so far binding "papal" calendar. New calendar, developed by mathematicians (Romme’a and Monge’a) and astronomers (Langrange’a i Pingre), was passed 5 X 1793 r. A few weeks later - 24 XI 1793, at the request of the poet Fabre d'Eglantine - it was corrected and an ordinance was issued on its implementation.

Revolutionary calendar (for that is how it got its name) he endured the era of Dionysius, i.e.. our era, replacing it with your own. Her first year was starting 22 IX 1792, i.e.. from the date of the proclamation of the republic. Thus, the beginning of the year fell on the day of the autumn equinox. 3 ordinary years after 365 id i 1 a leap year comprised a 4-year cycle, called franciada (Francede).

The year consisted of 12 months after 30 days, to which they were added at the end of the year 5 follow-up days, and in leap years, in addition, the sixth supplementary day, called "the day of the revolution".

The months received the names proposed by d'Eglantine, taken from economic and natural phenomena, the three months of each season had names with the same ending. Namely:

The 7-day week has been abolished, dividing the month into 3 decades. Individual days were given names: Primidi, Give, Fridi, Quartids, Quinłidi, Sextidi, Septidi, Octidi, Not the Decades. The last day of the decade (Decades) and the follow-up days were feast days. Of course, the day was also divided according to the decimal system. So he had a day… 10 hours, and the hour - 100 minutes, in turn a minute - 100 seconds. However, this mechanical division of the day did not come into effect. He remained a paper division.

The new calendar - although "revolutionary" - was nevertheless based on the old one. Only its "internal" structure has changed. Breakdown of the year, as well as months, he did not arouse enthusiasm of the population. In practice, it turned out to be not so simple, as it seemed to its creators. The limitation of the number of holidays was especially questionable. The "supplementary days" at the end of the year were also inhibiting in economic and social life.

The calendar was first changed by Napoleon in 1802 r., abolishing the division of months into decades. And a few years later - 11 Nivóse in the 14th revolutionary era, or 1 I 1806 r. our era - the revolutionary calendar was no longer valid. The previous one was restored - Gregorian.

It was introduced again - and for a short time - by the Paris Commune in 1871 r. It was in force in Paris in the months of Germinal and Floreal LXXIX. revolutionary era, then it was reverted back to Gregorian.