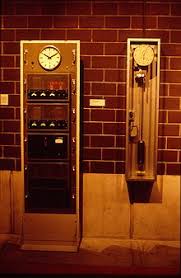 From the first gnoamon clock to "Portioi ham", that is, a sundial worn as a pendant, several thousand years have passed. From "Portici Ham" to "Nuremberg Egg" - 1 500 years. But then the development of the art of horology was already taking place in milestones.

The newest clock - "atomic" - measures time with great accuracy. It allows you to find even the smallest unevenness of the Earth's movements. However, it is a very expensive and complicated laboratory device.

The creation of the atomic clock was preceded by others. For example. electric clocks. The first such clocks were created in 1839 r. They constructed them (independently of each other) Karol Steinheil and Karol Wheatstone and Aleksander Baim. They have this advantage, that connected to the common network they "go" identically. They also turned out to be particularly useful on the railroad.

Electromechanical clocks were also built (swinging, with mechanical power supplies, electric pulses introduced in motion). It was invented by the Englishman W.H. Shortt w 1924 r. They are accurate to a few thousandths of a second a day.

And finally - the clock, which with its accuracy beat all known to us so far! It's a quartz clock. It was created in the third decade of our century. It looks like a radio receiver. It has neither a pendulum, no balance. Instead, it has quartz and a synchronous motor (connected to a special generator). So it is more of a mini-power plant, producing a constant frequency current, with an accuracy of up to 1/1000 000 interest! The regulator of the constancy of the electric current is a small piece of crystalline quartz, from which the clock got its name.

The first quartz clock was built by an Englishman, W. A. Morrison w 1924 r., and his description is given in v 1929 r. It ushered in a new era in timing methods. The first "atomic" clock was put into use in 1949 r. in the US National Bureau of Standards (the equivalent of our Central Office of Measures). It received the name of "ammonia maser". It is not actually a clock (for it does not indicate the hours, minutes, seconds), lecz raczej „wzorcem’ częstotliwości”. The actual atomic clock is a quartz clock coupled to an atomic frequency standard. And this is the clock that tells the time. Atomic clocks with cesium masers have proved to be particularly accurate, ruby and sodium, in which the phenomenon of magnetic resonance was used. They achieve an accuracy of the order… 0,0000003 seconds a day. Such a clock was also made in Poland. It is the work of researchers at the Institute of Fundamental Technological Research of the Polish Academy of Sciences in Warsaw.

What about wearable watches, these, which dictate our time every day?

• W 1952 r. the electric wristwatch "Electronic" was created. They made it: French company "Lip" and American "Elgin". A watch - having only 25 mm in diameter - powered by a miniature battery, sufficient for 2 patch. It drives a miniature electric motor. However, the accuracy of the watch is not greater than that of ordinary automatic winding watches.

• W 1976 r. made in the USA watch "Pulsar", with electronic integrated circuit. It is water- shockproof and timing with accuracy 60 seconds a year.

• In years 70 made (m. in. in Switzerland, USA, Japan and the USSR) quartz watch. From 1976 r. it is also produced by Warsaw's Zakłady Elektroniczne "Warel". Has no clues. Hours, minutes and seconds, and also a month, day and time of day is indicated on the small screen. The accuracy of the watch is 36 seconds a year.

So we have very accurate watches every day. Proverb: "Kick of watches, a kick of calendars and a kick of doctors, that's three dozen liars ”so it ceased to be (when it comes to watches) current.