Criticism of the Gregorian calendar grew. It lasted for many centuries, but it was especially intensified in the nineteenth century and our century.

There were many reform projects. Reforms - it must be emphasized - "internal", because all designers were careful, that the 26-second difference, which exists between a tropical year and a calendar year, does not matter. 1 the day of the difference will not come until 4882 r., so in 3300 years from the introduction of the current calendar. It is a very distant perspective.

W 1914 r. there was even a special congress in Switzerland, where various projects were considered.

The congress of the International Astronomical Union also paid a lot of attention to the need for reform, sitting in 1922 r. in Rome. By the way, he proposed to postpone the beginning of the year, that is the day 1 January, for the moment of the winter solstice of day and night, which is now 22 XII.

The League of Nations also dealt with the reform. W 1925 r. she was presented to her 40 projects. In the following years - to 1939 r. - their number grew to approx 200. Two of them definitely deserve attention.

"Additional" 13 the month would be placed in the middle, so - after the 6th and before the 7th month.

The second - with 6 end and the second half of the additional month (middle) and it would also 182 days.

Such a year can be divided into quarters, counting after 91 days, which, however, would not coincide with the months.

So the year of the "universal calendar" would consist of 364 days. "Extra days" would be "days without a date". In an ordinary year, "day without a date" would appear at the end of the year, in a leap year - also after the 6th month.

In such a calendar, each day of the month would have its own fixed numbers. If the months started on a Sunday - the dates of the individual days would be as follows: 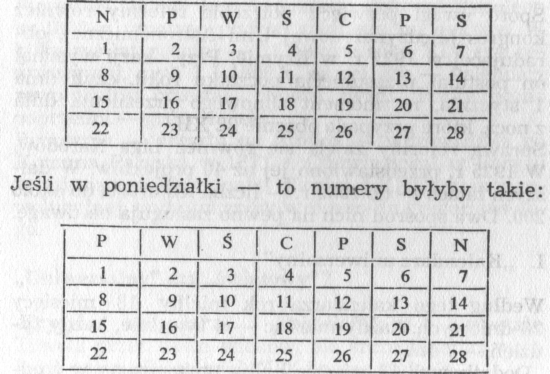 Simple? Of course. After all, the stabilization of calendar dates is not an easy matter.

The proposed calendar has more advantages.

He gained many followers. He was and is popularized especially in the USA. The Universal Calendar Society operates here to this day (based in Washington), which very vigorously advertises this calendar, especially in the "Monday" version and with the middle month - "Solarius".