Time is written with water 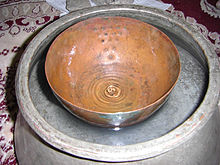 Sundials are devices for reading time based on data indications by nature. The clock independent of the apparent movement of the Sun around the Earth was a water clock.

It was based on the simple principle of two vessels. Time measured the flow of water from one vessel to another. However, the accuracy of the clock was not great. After all, the flow of water had to be even, and it wasn't that easy. In any case, it is known, that it is the oldest water clocks preserved to this day, originating in Egypt from ca. 1400 r. p.n.e. he was wrong during the day, Fr. 3/4 hours.

Such clocks were also built in China. Apparently - as some chroniclers claim - it was invented by Emperor Huang Ti (ok. 2700 p.n.e.), to whom the invention and other technical "wonders" of that time are credited (m.in. wagon with wheels). However, some information about water clocks in China comes only from the Tang Dynasty, so from years 618-907 neither. They were wonderful, "Multi-story", it was not only the hours that indicated, but also smaller units of time.

We know little about the water clocks in Babylon.

So far, no such monument has been found.

However, one can conclude from the descriptions, that water clocks have been known here for a long time. In Greece, they appeared in the first millennium BC. They were used, among others. in. to schedule speeches at public meetings. They were also known, as Tacitus assures (55—120 n.e.), in Roman courts - this is already in the time of Pompey (ok. 52 r. p.n.e.).

The first mechanized water clocks (not to be confused with mechanical, moved by mechanical force) appeared in Egypt in the 4th century. p.n.e. From there they got to Greece, where they have been perfected. The magnificent clock was built, among others, by. Greek physicist from Alexandria, Ktesibios (Ul w. p.n.e.). It was a "miracle" of the then technology. He indicated "unequal" Egyptian hours - different during the day, others at night. And he was absolutely thorough! The Greeks also built clocks for home use, some of them are very fancy, e.g.. z figurkami, animals, and even with an "alarm".

The ideas of the Greeks were later taken over by the Arabs, famous for the production of very complicated water clocks, considered true works of watchmaking.

One of these clocks was donated by Caliph Harun al Rashid to 807 r. Charles the Great. Unfortunately, no one around the emperor knew how to use it (this gift, of course, was forfeited).

So the popularization of water clocks in Europe took place a bit later, there is no doubt, however, that it was due to the Arabs.