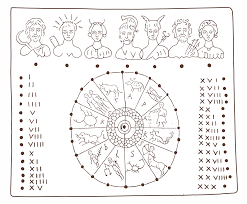 Any clutter records, related to a calendar based on the lunar year, but the Greeks struck it. -The calendar was taken over from the Babylonians. We don't know when. In any case, he was known in Greece at the beginning of the first millennium BC. But the Greeks did not create a unified calendar system for all of Hellas: different calendars existed in different Greek city-states. The names of the months were also different, another way to reconcile the solar and lunar systems, different beginning of the year, and even a different "starting point" for the count of years. The Athenian calendar year began around mid-July and consisted of 12 months after 30 days. So it embraced 360 days. Then the number of days was limited, also introducing 29-day months, which alternated with the 30-day ones. To compensate for the difference between the lunar and solar years, an additional one was introduced every few years, thirteenth month. An 8-year cycle was adopted, in which year III, V and VIII had 13 months and counted 384 days, and the remaining years - after 12 months - counted after 354 days.

W 432 r. p.n.e. a new reform was made. Its author was an Athenian mathematician and astronomer, Meton. The thirteenth month was now in a 19-year cycle: in year III, V, VIII, XI, XIII, XVI i XIX. W 330 r. p.n.e. Kal-lipos from Kyzikos put together a calendar cycle, including 76 years. He amended it in 145 r. p.n.e. Hipparch. So there were many reforms and calendar corrections, until the Athenians themselves got lost in their own chronology, not to mention later historians. Taking into account the fact, that other city-states they had different calendar systems… converting years has become extremely difficult, if at all possible.

The Athenians did not number the years. Each year was identified by a name, the incumbent archon-eponyma. Pisano: "For the archon", "When he was an archon"… In Sparta, years were defined similarly - according to the incumbent ephor-eponym.

W IV w. p.n.e. attempts were made to determine the date of the capture of Troy. Ryło is an important event for all Greeks, it was rightly considered, that it should be the beginning of the "Greek era", i.e.. the starting point for the chronology. Unfortunately, two centuries of research were unsuccessful. It means: one of the findings was flawless (year 1183 p.n.e.), but… no one in Greece at the time was sure of this.

In the Hellenistic period in the Greek East, however, dating according to the "Seleucid era" (as with the Jews). The "Bithynian era" was also used, which started on 298/297 r. p.n.e., when Greece - as Achaia - became a Roman province (146 p.n.e.), the "Achaean Era" was introduced. It has been in force since 145/144 r. p.n.e. It is impossible to discuss in detail the Greek calendars. Each city-state had a different calendar. Suffice it to say, that the first month of the Athens calendar year was Hekatombaion (July August), in Veotia - Bukatios (December January), w Etolii - Prokoklios (September October), in Thessaly - Itonius (August September), in Rhodes - Thesmophorios (October November). Also nazwy miesięcy były do siebie niepodobne. Here are some examples:

The obvious thing, Christmas was different too (religijne i state), celebrated on different dates.