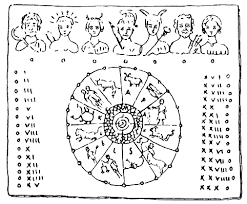 The creator of the Roman calendar was the legendary founder of Rome - Romulus (VIII w. p.n.e.). The natural year was the basis, based on observations of certain phenomena in the animal and plant world. It consisted of 10 months. Six of them had po 30, and four - after 31 days. The Roman - Romulus year - thus counted only 304 days. It was beginning 1 III. The arrangement of the months was as follows:

Martius - March - dedicated to the god of war, Mars, "Father" of Romulus

Maius - May - the month of Maya, goddess identified with Bona Dea

Iunius - June - the month of Juno

Quinctilis - July - fifth in a row

Such a calendar could not, of course, last long. Therefore - with the achievement of a higher degree of civilization development - the lunar calendar was introduced with the month as the most important unit of time. When it happened - it is not known. The Romans argued, that this was done by Romulus' successor, Numa Pompilius. Others - that the god Janus himself, creator of Heaven and Earth, father of all other gods and people, also the god of time (by the way - the only native Roman god in the pantheon of gods imported from Greece). Either way - it was an important reform.

As it follows, The Romans exaggerated. Anyway, no wonder: in astronomy and mathematics they were not strong. They probably did not know the true length of the solar year yet.

Added 2 months bore names: January and February. They were inserted into the calendar not after the tenth month - December - but at the beginning, so before March, dedicated to Mars. Ianuarius was the month of Janus. It was now opening not only the Roman year, but also every month, and even a day. Unfortunately, it was not a perfect calendar. Priests took care of him. The Act of Manius Acilius Glabrion of 191 r. p.n.e. imposed on them the obligation to correctly establish leap years. However, they rarely lived up to it. As a result, the calendar was in chaos. It was only the reform of Julius Caesar that put an end to this, introducing new calendar based on the solar count of time.

And since the years were counted?

In Republican Rome, a system of determining the year according to the names of both consuls was maintained, so similar to Athens (according to the archon) and in Sparcie (ephora). It was written e.g.. "For the consulate of Marek Messala and Marek Pizon". The starting point was the date of the foundation of Rome, but finding it was difficult. Only the Roman encyclopedist did it, Marcus Varro z Beate (116—27/26 p.n.e.). He took a year 753 p.n.e. (according to our conversion) as the foundation year of Rome. This date was widely recognized as the beginning of the Roman era, but… only in historical and literary chronology. Pisano: ab urbe condita - since the founding of the city. Sometimes there was also a dating system from… the expulsion of the kings from Rome, what - according to Roman historians - happened approx. 510 r. p.n.e. Every day - in official and private chronology - they were dated in the old way: according to the names of the consuls in office or the years of the rulers' rule.