The oldest printed Polish calendar - and at the same time the oldest Polish printing! - to "the current calendar year 1474", printed in Latin in Krakow at Kasper Straub's printing house. It's worth adding, that it was only a year later than the world's oldest printed calendar, published in Latin and German in Nuremberg! "Calendarium" is in the collections of the Jagiellonian Library in Krakow. 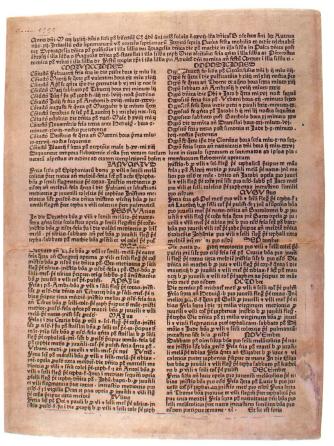 The oldest calendar in Polish (unfortunately preserved only in fragments) was published in the printing house of Jan Haller in Krakow in 1516 r. The first known to us wall calendar (before the war it was in the Public Library, including. Of Warsaw) published by Ungler's printing house in 1531 r. It included, among others. the prognosis "what a day has a bull was done or warned" and regulations, when is the best time to buy horses, sell grain, cultivate the field, get married, etc..

They enjoyed considerable recognition in the 16th century. calendars by Mikołaj Szadek, issued under various titles (e.g.. "The expression of the heavenly signs… diligently… stacked "from 1528). In the second half of the 16th century. permanent titles for calendars have stabilized, published in various editorial offices and editions, sometimes for decades.

The invention of printing had a positive effect on the increase in the popularity of calendars. They have now also become available to "ordinary" noblemen and townspeople. They mirrored them in hundreds, and even thousands of copies by famous Krakow printers. They were doing good business with them anyway. This is evidenced by, for example, the dispute of the Krakow publishing houses Wietor and Szarfenberg about the privilege to publish calendars in Poland, anyway, the dispute is unfounded, because the Polish kings did not grant any of them. Everyone in Poland could issue calendars, thanks to which their level and attractiveness grew steadily. Especially - after the Gregorian reform of 1582 r. Calendars from this period took care of everything: they gave advice and divination, informed about wars, fires, business man, roads, Christian faith, Mohammedan and Jewish, posted messages of happiness and good luck, in short - they were publishing houses to read, being at the same time a not trivial source of knowledge about the country, the world and life.

Over time, "industry" calendars began to appear, "Specialist", targeted at specific social or professional strata, be devoted to only one area of ​​knowledge. They also more and more often played a political and educational role. They taught and entertained.

W 1665 r. For the first time, we have a medical calendar with tips on hygiene and dietetics. And the second - very interesting, "mischievous", under the somewhat misleading title "Perpetual Calendar". According to Aleksander Bruckner - "the most sophisticated" Polish book, which was saved from the prohibition of censorship by the Krakow official, probably only an unsuspecting title. Maybe an exaggeration. But it certainly was bursting with life. Already, the poem on the cover spoke for itself:

“It was printed in the wind and the fog was pressed down,The papyrus rain did not pour out, after all it was released ".

However, ordinary calendars prevailed, everything conceived, full of fortune-telling and prognosticators. An example is Mikołaj Brożek's "Prognosticon" or "A warning from blue runs", released 1667 r. in Cracow:

“During the summer there will be constant fever, tertianos, maligny, quarters, stomach weakness, eyes and ears, pains, face spoiled, heart tremors and other contagious diseases. In the fall, the fevers are different, gastric siltation, drought, blackened waters, dychawice, heavy gasp. For the winter the sides of asps, hepatitis, snorkels, breast pain, apoplexy and other diseases common to our countries ".

And in the spring? - "Dizziness, melancholy, contagious diseases, blood flow, headache, coughs, impetigo, ulcers, members and joints asp ", where - "they will mark many with iron".

So - the disasters themselves! Even pregnant matrons were not to be missed, for whom - "not wanting to add a burden" - this is the scholar, after all, the prognostic husband figured out:

“In the spring they will have no consolation for their Lady of the House of resting death… The summer is funnier, but with great danger of health. Autumn with fetal retention and other difficulties will do well. Winter almost doubts about life and you have to respect yourself very much ".

It's a wonder, that the women of that time gave birth anyway, and the nation did not perish from various calamities and plagues. Fortunately, not everyone read calendars then.