What does a drum kit consist of. 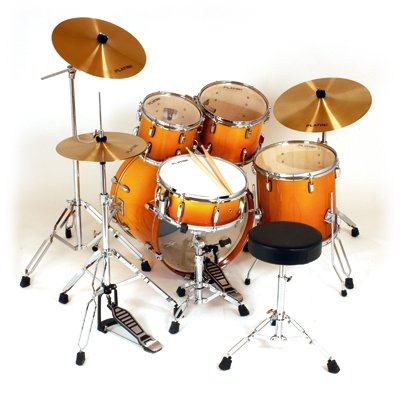 This entry opens the series at least 4 drumming guides. This part will deal with the basics, the second is about recording, the third is about mixing, and the fourth is about the renovation of percussion equipment. I think, that both beginners and more experienced people will find something interesting for themselves. I cordially invite you to read 🙂

Elements of a drum kit

We'll start with the basics, that is, from this, what parts the kit consists of. I will discuss a bit of technical issues and what the different elements mean. For absolute beginners- mandatory item:) Thus, in the percussion set we can distinguish the following items :

> Bass drum (rate, central, kick) - The most important element of the set, na którym we knock out the base of the rhythm. There is a reason why he is called the tactor. Kick drum is a drum made of several layers of plywood, usually their number is greater than in other boilers. Its outer diameter is from 16 do 26 cali (40,6cm – 66,4cm). Głębokość to najczęściej 16″ lub 20″. The strings are thicker niż na pozostałych częściach setu. Ich tuning is much lower, making, that the control panel when hit by a plastic or felt beater makes it loud, bass sound. The resonant head is often equipped with a small microphone opening. On the strike tension, many people stick a reinforcement patch, and inside it installs damping rings. Unfortunately, despite these treatments, the foot often serves as a basket for clothes or other blankets (for even greater damping). 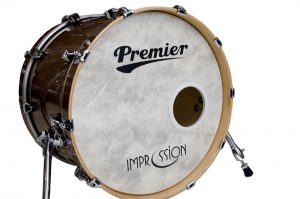 > Werbel (snare) - Next to the control panel, the second most important element. The snare drum is a small one (height usually 5,5-6,5 cala) drum made of plywood, steel, copper or solid wood. Jego cechą charakterystyczną są springs montowane na powierzchni naciągu rezonującego. Their number affects the amount of 'noise' and generally treble. When the working head is hit, the resonant head vibrates as well, and with him the springs. W efekcie słyszymy wyraźny "shot" z dużą ilością wysokich i średnich tonów. The Snare drum has a simple mechanism, that allows us to regulate the tension of the strings. A snare drum without wires or with a loose mechanism will usually sound short and quiet, especially compared to the volumes. 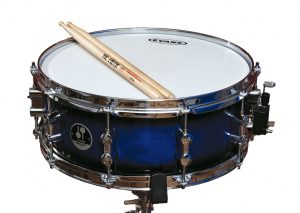 > Hi hat – To dwa talerze (usually 14 ″ in diameter) made of bronze or brass by turning (sometimes also forging). They are mounted on a special tripod, in which, using the integrated pedal, we can change the height of the top plate. The depressed pedal touches the cymbals with each other. Not pressed- moves away. Thanks to this, we distinguish two types of hi hat sound: closed-short, punctual, cichszy oraz open- long, rustling, louder. 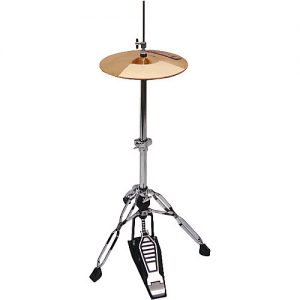 > Tomy (transitions, boilers) - Drums mostly made of plywood in a wide range of diameters (6 ″ to 14 ″). They are equipped with two separate membranes and a holder (element for mounting on a tripod). Most often used in aisles między taktami lub całymi frazami- diversify the sound of the piece, create the atmosphere desired by the drummer. When used correctly, they make an impression. Unfortunately, some drummers surround themselves with a lot of volumes, and they actually use maybe two. Others cannot use them at all. And the latter can not even play well on the foot alone, werblu i hacie. A real sweeper will make a show with even one small cauldron. 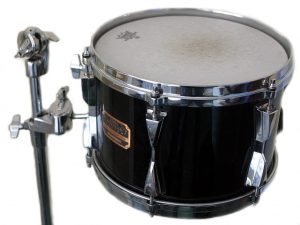 > Well (floor tom) - One more drum with a diameter of 14 ″ or 16 ″. Clearly deeper than the volumes, hence its common name. Besides, its construction does not differ from the boilers. It is mounted either on a separate tripod or on legs, on the floor (hence its proper name). The well is tuned lower than the volumes, a jej the sound is long and deep. However, who is in their right mind, let me not buy poor quality floora- its sound like a cardboard box, half full, will roar throughout the hall. 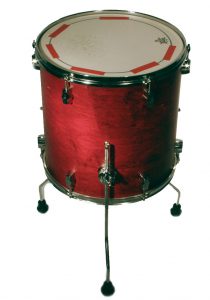 > Crash – Talerz perkusyjny, made with the same technique as the hi hat, but usually bigger, thinner and with a more convex dome. Sizes most often from 15 ″ to 19 ″. Uderzenie w krawędź zapewnia a long rustling accent w utworze. The pitch of this note may be lower or higher depending on the construction. Regardless of the music, what we play, our set should include at least one such plate. 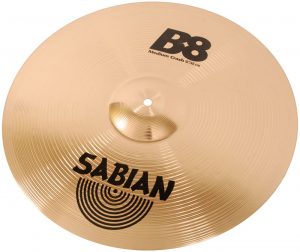 > Ride – Duża, heavy sheet metal, whose diameter starts with 20 cali. Ride uderzany mniej więcej w połowie swojej długości wydaje long, bell sound z wyeksponowanym atakiem. Hitting the dome is clearly louder and higher. Nie bez przyczyny mówi się na nią bell (bell)- something like this can be heard in the church sometimes. The ride game has many uses, in all genres of music. We can use it to differentiate the percussion parts in the bridges / verses / choruses of the songs, control overall strength, with which the drums play or even use it as the basic cymbal throughout the piece. Like crash, an indispensable element of each set. 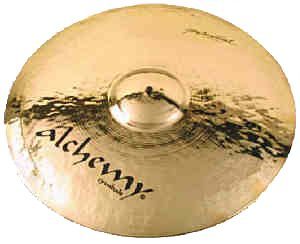 > China – Specyficznie wygięta blacha, which with its sound refers to the Far Eastern traditions 🙂 Loud, a bright 'chinese woman' is successfully used to diversify our tinsmith. 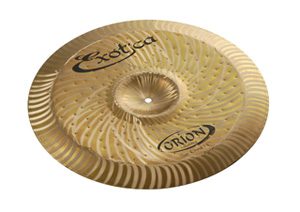 > Splash – Mała, delicate badge, which usually serves as a "disturbance" in the songs. Like china, has quite an unusual sound. Something like a lot small, fast and bright crash.